If you ask us the female athlete body type is the most attractive of all body types. I am sure this is not a big surprise coming from TheAthleticBuild.com. We have painstakingly researched female athlete after female athlete to come up with the 50 hottest female athletes today.. It was a tough job but someone had to do it.

(Update 4/24/21: While we were the first to come up with a top 50 list of the hottest female athletes others have copied our idea, we are now expanding our list to 60 athletes. I’m sure other sites will copy that as well.) 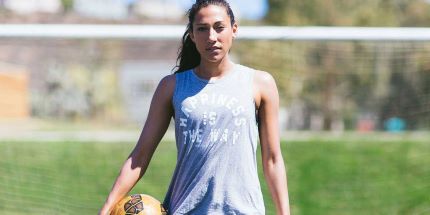 Christen is a striker on the US Women’s Soccer Team. She also plays for Manchester United. She played her college soccer at Stanford University and won the 2010 Hermann Trophy for being the nation’s top college soccer player. 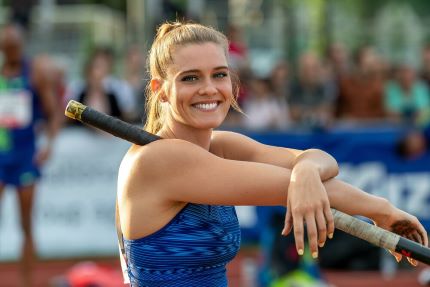 Alysha is a Canadian pole vaulter. She won the gold medal at the Gold Coast Championships in 2018 and set the Games record with a 4.75 meter vault. She also made some news a couple of years back when involved in an altercation with her boyfriend, NFL Linebacker Anthony Chickillo (we’ve never heard of him either) at a casino in Pennsylvania.

Khaddi is a Swedish track and field athlete that specializes in the long jump along with the triple jump. She won a bronze medal at the 2021 Indoor Championships in Toruń. She is one of 8 children.

Winifer is a volleyball player for the Dominican national team. She won the hearts of many men during the 2016 Olympics in Brazil.

Dorthea is a Canadian biathlete. She won the bronze medal in the mixed relay at the Sochi Olympics in 2014. She has also won too many other medals to list over the years. Needless to say, she is well accomplished.

Ganzebe is a long-distance runner from Ethiopia. She was a gold medal winner at the Beijing World Championships and won the silver medal in the London Olympics. She is also the current world record holder for the 1500 meter run with a mind-bending time of 3:50.07.

Morgan Mitchell is an Australian Sprinter who specializes in the 400 meters and also competes in the 800. He father is a former professional basketball player.

Yuliya is a high jumper from Ukraine. She won a silver medal in the World Championships back in 2017 and has won many other medals and was in the 2016 Olympics but did not medal.

Megan is an Australian MMA Fighter in the UFC in the featherweight division. She has a purple belt in Jui Jitsu and stands at an imposing 6 feet tall.

Natasha is a sprinter on Team USA who is a seasoned track veteran. She won a gold medal in the 4×400 meter relay at the 2008 Olympic Games.

Camila Giorgi is an Italian professional tennis player of Argentinian descent. She won her first WTA title this year and has won 5 singles ITF titles in her career.

Jessica is an MMA fighter with the UFC. She is considered one of the best female strikers out there and went totally undefeated as an amateur.

Avril is an Australian/Swiss pro boxer. She started boxing back in 2012 but might be best known for winning the Miss Swimsuit USA International 2014 which is the biggest swimsuit pageant in the world. She currently lives and trains in Miami. Not surprisingly she also does modeling on the side.

Hilary Knight is a professional hockey player, Olympic Silver Medalist for the USA, MVP of the Canadian Women’s Professional hockey league, four-time World Champion and three-time All American in the sport of women’s hockey…and she looks good doing it!

Leilani Mitchell plays for the New York Liberty in the WNBA.

Felice is an MMA fighter with the UFC. She has one of the best bodies in the sport and isn’t shy about showing it off either.

Nichelle is a Canadian soccer player who plays on the Canadian women’s team and is their top goal scorer. She also plays for the Houston Dash and played her college soccer at Ohio State University.

You know who she is, especially if you like booty.

Ali is a US women’s soccer player. She is currently playing for the Washington Spirit of the National Women’s Soccer League.

Julie is another member of the US women’s soccer team who is very well represented on this list. She also plays defender for the Chicago Red Stars.

Elena Delle Donne is a professional basketball player with the Chicago Sky in the WNBA. She played in college at the University of Delaware, she was a consensus First Team All-American and National Player of the Year candidate in her junior and senior seasons.

Sarah Backman is a Swedish 8-time world champion arm wrestler. This means she can probably beat you in arm wrestling, with looks like that we doubt you will hold it against her.

Silje Norendal is a Norwegian snowboarder. She was a gold medalist in the 2013 European X Games.

Next up we have pro golfer Cheyenne Woods. She is the niece of Tiger Woods so you know she has golfing in her genes.

At the time this was written she had 2 pro wins in her career.

Simone is an American Gymnast who has a combined 30 Olympic and World Championship Medals. She is the most decorated American gymnast and the 3rd most decorated gymnast in the world. Also, her favorite food is Italian.

Maryna is a track from Ukraine who performs the long jump. She won a silver medal at the European Championships in Berlin in 2018.

Anastasia is a pro surfer and spokesmodel from Southern California.

Aslanni is a Swedish soccer player who plays for Sweden’s national team. If you watched the 2019 Women’s World Cup you would know what a vital role she played in helping Sweden reach the finals.

Rachel is a soccer player from England who plays for the Houston Dash. She also plays for England’s women’s team and is a sponsored athlete with Under Armor.

Related: The Best Fat Burning Supplements to Get You Shredded

Kaytlin is an MMA fighter with Bellator and is a former competitive cheerleader.

Robin is a Canadian pole vaulter. She wears a helmet while pole vaulting due to her history of having bad concussions that started when she was a gymnast.

Darya is a Russian long jumper who has won many European Championships over the years and was in the 2016 Olympic games.

Related: 25 Hottest Female Track and Field Athletes in the World

Sloane Stephens is an American professional tennis player who is currently ranked World No. 33 by the Women’s Tennis Association.

Rachael Ostovich, how did you miss her..wow..she smokes every woman on your list

This list is terrible. Some of these woman are not attractive AT ALL. But I am a VERY GAY man, so what do I know.

Wrestling – Too many to name! But surely, Paige, Natalya Neidhart, Alexa Bliss, Jordynn Grace to start off!

Where is Patrícia Mamona? Is this a joke?

Serena Williams is a man. I can’t believe he is on this list.

Good ones! We will have to add them to this list and our hottest female track athletes list.

Georgia Ellenwood is not on the this list? She’s the hottest athlete in all of sport. This list doesn’t make any sense at all.

Got as far as Serena Williams and stopped

Mark
Reply to  The Athletic Build

Thanks for the heads up, we will definitely fix that.

These women were put in the WORST order possible…I mean look at number #1!! No way in life is that the HOTTEST sports woman available to the public. Hell, Lisa Leslie looks better lol Try again guys

I disagree!!
Paige Spiranac looks MUCH better than Lisa Leslie (and no, I am not racist).
DON’T try again guys!!!

I would love to see Dina Asher-Smith included.

Good one, we will have to add her.

NO ALY RAISMAN?! ARE YOU HIGH?!

What about the middle long distance athlete Ganzebe Dibaba?

Where is Dorothea Wierer?

Any list of hottest female athletes must include Anna Sidorova!

Best Treadmills for Home Use in 2021