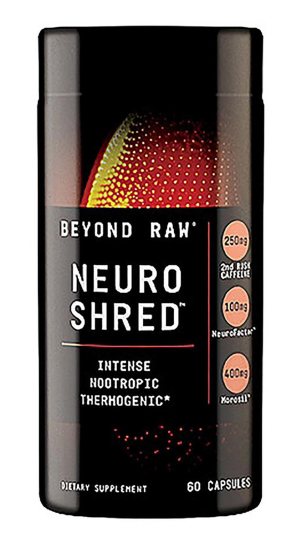 Beyond Raw is a supplement brand owned and operated by retail giant GNC. The brand markets various products including; pre-workouts, testosterone boosters, protein powders, and amino acids among other things.

Today we are putting the brand’s fat burner Beyond Raw Neuro Shred under scrutiny.

From our initial research, it seems Beyond Raw Neuro Shred has been crafted for the type of weightlifter who wants to elevate their fat burning game, without suffering from overstimulation and the risk of crashing.

Beyond Raw Neuro Shred is also described as a type of fat burner with a nootropic function, a pairing that is quite common these days.

What is Beyond Raw Neuro Shred?

Beyond Raw Neuro Shred is claimed to be a super potent thermogenic blend of science-backed ingredients, with the dual purpose of helping you burn through fat whilst also boosting your mental performance too.

These kinds of multi-benefit products have become popular of late, presumably because customers are looking for something not only to boost their bodies natural ability to burn fat but also to boost their motivation too.

15 of the best fat burners for women on the market

How Does Beyond Raw Neuro Shred Work?

In order to lose weight, you must achieve a calorie deficit, that means you need to expend more energy from your body each day than the energy you get from that day’s food intake.

As a result, there are only really a few ways a fat burner can help you achieve this. Either it can include ingredients to raise your core temperature during exercise, or alternatively, it can suppress your appetite, so you don’t eat too much. Or it can do both.

From what we can tell Neuro Shred doesn’t make major claims about appetite suppression, it’s key focus seems to be around raising your body temperature and getting you super focussed for your workout.

The Ingredients in Beyond Raw Neuro Shred 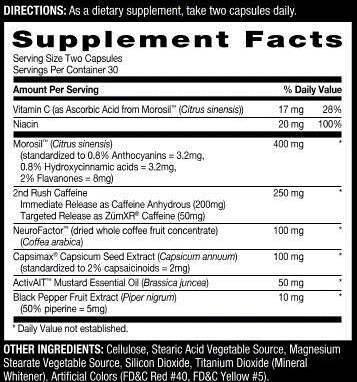 This is a standardized extract sourced from Moro red oranges. The active compounds standardized in Morosil are apparently known for their anti-obesity effects. The problem with Morosil is that it is yet to be confirmed whether it works in human subjects or not.

From what we’ve read this ingredient is more connected to focus than appetite suppression or weight loss. At a dose of 100 mg, we have a decent amount especially because NeuroFactor is a branded product.

Reviewing Neuro Shred’s ingredients has posed a few important questions. It is clear that the ingredients that are included are good quality and sourced from branded suppliers. However, the overall dose of the ingredients is way too low for them to have an effect on your body.

When you consider that your body’s ability to absorb some of these ingredients is actually quite limited a dose of less than 1000mg per serving is not going to produce results. You would want to see at least three times this dose if you were going to see measurable results.

There’s also the equally important subject of missing ingredients to consider, which we cover below.

Beyond Raw Neuro Shred has some proven ingredients, but it’s not exactly what you would call a complete fat burner. Below are some of the ingredients we feel would enhance its effects considerably.

We review the best fat burners for women online.

Side Effects of Beyond Raw Neuro Shred

The side effects associated with cayenne and caffeine should be mitigated by the premium ingredient forms we have. However, on the small chance of you being extra sensitive to cayenne and/or caffeine, there’s a chance you might feel a slight burning sensation in your belly (due to cayenne), and perhaps slight jitters or sleeping difficulties from caffeine.

Will Beyond Raw Neuro Shred Help You Lose Weight?

Beyond Raw Neuro Shred is made by a huge name in the industry. That isn’t to say you should believe the hype though, this product is woefully under-dosed from what we can see, meaning any fat burning is likely to come solely from your own efforts.

Beyond Raw Neuro Shred is a short and simple fat burning product that claims to activate thermogenesis and spike your metabolic function.

The ingredients are definitely premium, but the doses aren’t going to be high enough to trouble your fat reserves. Sure, there is plenty of caffeine in here, so that will help with energy and concentration, but it won’t be enough on its own to create weight loss.

Beyond Raw Neuro Shred is not a terrible supplement, but $50.00 per month for some caffeine and a few other natural ingredients doesn’t seem like a fair trade.